Several crab species are found in Washington's marine waters and along its shores, though only a few are large enough to be of commercial and sport interest. 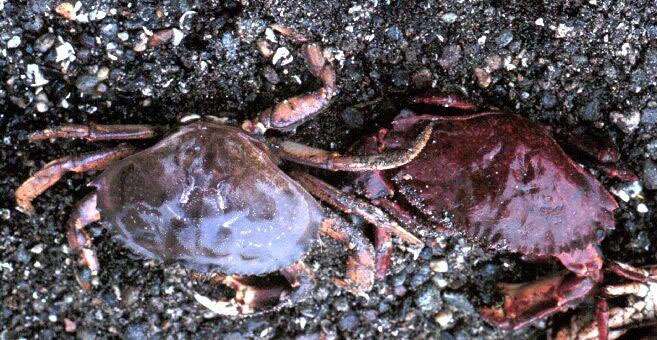 Crabs are crustaceans, having an exterior skeleton or shell. Two crab species (Dungeness and Red Rock) are harvested locally. Crabs are most commonly harvested with crab pots but are also caught using ring nets, dip nets, and by wading in shallow water during spring and early summer. Click Here for approved crab gear.

Remember to check with WDFW for current openings and more information.

While recreational crab fishing at Grays Harbor Beaches can be rewarding, you need to know the different crab species, the sex you can keep and make sure they are of legal size to retain.

You are also required to have a shell fish license. 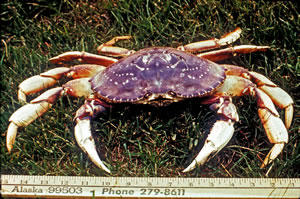 One of the most popular items on Washington seafood menus is the Dungeness crab. This hardshelled crustacean is fished from the Aleutian Islands to Mexico. The shell is purple-tinged, gray or brown on the back and the tips of the claws are typically white

. The Dungeness crab can reach ten inches across the back though six to seven inches is more common. In Puget Sound this crab species is most abundant north of Seattle, in Hood Canal, and near the Pacific coast.

The Dungeness crab is frequently associated with eelgrass beds and prefers sandy or muddy substrates.

Another crab species similar to, but smaller than the Dungeness, is the red rock crab (aka red crab, rock crab). This species usually measures less than six inches across the back and is characterized by large claws.

Despite being less meaty than the Dungeness, red rock crab meat is also very tasty.

Where present in considerable abundance, the red rock crab is a serious predator on both oysters and hard-shell clams. In some areas, controls have been necessary to prevent undue damage to clam and oyster crops.

It can be distinguished from the Dungeness by the presence of black on the tips of its claws and by its red coloration. The red rock crab also prefers rocky substrates, as the name implies. 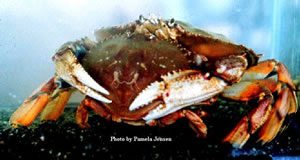 Mating occurs between hard-shelled male crabs and newly molted, soft-shelled female crabs. Take care not to disturb these clasping crab species when fishing intertidally. The female crab stores the sperm in a seminal receptacle. Because the female loses the sperm receptacle during growth molts, she cannot molt at the same time the male molts.

Female Crab with a mass of eggs 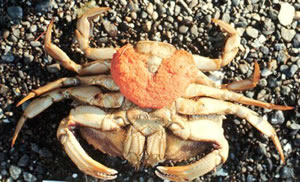 The eggs are fertilized when they are laid or extruded to become attached to the abdomen of the female. The mass of eggs carried by the female is frequently called the sponge. When first laid, eggs are bright orange in color. Females in this condition are commonly found buried in the sand or subtidal bottoms.

Large females may carry in excess of 2½ million eggs. As the embryos develop the eggs darken to a dirty brown and eventually hatch, producing larval crabs. In no way resembling an adult crab at first, the larvae swim freely in the sea and progress through a series of molts in which their appearance changes considerably.

Dense swarms of crab larvae are often seen in the water and are fed on extensively by other marine organisms, including salmon. After developing into the adult shape and at about a quarter of an inch in width, approximately 12 months after mating, juvenile crab take up residence on the ocean bottom. Large numbers of young crabs are found in estuaries where they can tolerate dilutions of two parts fresh water to one part ocean water.

The Grays Harbor and Willapa Bay estuaries are considered unique nursery areas for Dungeness crab and certain fishes, such as English sole, with which they share the bottom environment.

Because crabs species are enclosed in a rigid exterior skeleton they must shed their shell to grow. This molting takes place about seven times during the first year of life and at a decelerating rate there after. An average size of 1¾ inches across the back is reached one year after the crab takes up bottom life. During a molt, the male crab will gain about 65% in weight. After the second year most crabs are sexually mature and a difference in the rate of growth appears between males and females.Females grow slower and only a small percentage attain a size greater than 6¼ inches across the back, despite complete protection from fishing pressure.

Before a crab sheds its aging shell a flexible new shell forms under the old covering. The old shell splits across the rear along what is known as the splitting or suture line and this allows the new-shelled crab to back out of the old shell. Even the coverings of the eye stalks and gills remain with the old shell. On emergence of the new-shelled crab, the tissues are saturated with water and expand the new shell to a larger size. At this stage, the soft-shelled crabs are readily susceptible to predators such as fish and other crabs, especially when confined in a pot. If you find these crab in your pot, please handle them with care. For a couple of days the survival of a new-shelled crab relies on its ability to remain well hidden or buried in the sand. Within a few days, the soft-shell crab becomes an active, ravenous feeder. It takes about two months, however, for a soft-shelled crab to fill with meat and become a prime quality, hard-shelled crab.

Shells shedded by crab species may wash in on beaches in large numbers and become the basis for false reports of dead crabs. In still or quiet waters the back of the shell that lifted during molting to let the soft crab out will drop back into position causing the crab to appear whole and dead. In most cases, molted shells break into several pieces before washing ashore and only a few legs or the top of the shell may be found.

Tagging studies have shown that the loss of legs reduces the chances of survival, but crabs do have the power to regenerate missing appendages. Complete regeneration requires two or three molts, which explains the occurrence of small, misshapen claws or legs. During the early part of life, lost claws or legs are quickly replaced because of frequent molting, but the same loss to an older crab could take years to replace.

The examination of stomach contents of Dungeness crab species has shown that they feed on a variety of marine forms. Stomachs of ocean crabs most commonly contain hardshell and/or razor clam, fish, and crabs. They may also contain material such as sea stars, worms, squid, snails, and eggs that were originally consumed by their fish or crab prey. Stomach contents obtained in the wild confirm the cannibalistic nature of Dungeness crabs and predation on newly molted crabs by fellow aquarium residents creates problems in laboratory studies. Contrary to general belief, laboratory observations and stomach samples indicate that Dungeness crab will not consume decayed or rotten food.

In addition to cannibalistic members of their own crab species, Dungeness crab are preyed upon a variety of fish including:

The Dungeness crab is also a favorite food of the octopus.

Human endeavors, such as gillnetting for salmon, otter trawling for bottomfish, and dredging to maintain ship channels, all take their toll on the Dungeness crab species.