Shucking oysters on the beach. All oysters taken by sport harvesters on public tidelands must be shucked (opened) on the beach, and the shells left on the same tideland and tide height where they were taken. To find out why, click here. 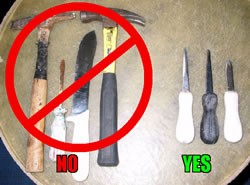 To shuck oysters, we recommend you use a good-quality oyster knife (one with a sturdy blade that won't bend easily) and a pair of garden-type gloves to protect your hands from cuts and abrasions. We don't recommend using screwdrivers or household knives. You'll also need a container with a cover to hold the oyster meats and their "liquor." Each harvester must have his or her own separate container.

We don't recommend young children shucking oysters, it's just too easy for them to cut themselves. Adults with a valid Shellfish License may shuck a child's daily limit of oysters, so long as the child participates in some way in the gathering of his or her limit.

Every shucker develops an individual style, and there is no single "correct" way to open oysters. Here are two popular techniques to get you started.

6. Now you can pull the top shell completely off (Figure 7). Notice the position of the adductor muscle "scar" on the inside of the top shell (Figure 8).

When shucking oysters, don't worry if shell fragments, sand, or other debris falls into your container. You can shake most of the debris off in the oyster liquor when you get ready to prepare the oysters for eating. Some people wash their oysters off in either salt or fresh water. Personally, we prefer not to wash them off in anything but their own "liquor" in order to preserve all the rich natural oyster flavor. Keep your oyster container as cool as possible until you're back in your kitchen. Storing your oyster container in a cooler immediately after shucking is ideal. Shucking oysters that are attached to rocks and/or other oysters takes a bit more skill, as does shucking very large oysters (it's somewhat more difficult to find the adductor muscle on larger oysters, and prying at the hinge can take more effort, too). Be sure to occasionally sharpen the tip of your oyster knife with a stone or grinder, especially if you use the side-entry technique.

Shucking oysters will seem difficult at first, but with a little practice, you'll find that you can cleanly shuck a limit of oysters very quickly. If speed is your goal, consider watching the West Coast's best shuckers who compete annually at OysterFest, held every October in Shelton, Washington. The world's fastest shuckers compete every fall at the International Oyster Festival in Galway, Ireland, where winners typically open 30 Atlantic oysters in less than three minutes!