The mainstay of Washington State's oyster industry is the Pacific Oyster, first introduced from Japan in 1902. A native species known as the Olympia oyster formerly flourished on Willapa Bay, Oakland Bay, and southern Puget Sound, but today is harvested in commercial quantities only in bays of southern Puget Sound.

Other transplants have also been tried, including Kumamoto oysters from Japan, and the European flat oyster from Holland. These are suitable as cocktail and specialty oysters, fitting into the size group between the tiny Olympia and the large Pacifics. Thus far only the Kumamoto has become commercially important, but production has been restricted for economic reasons. 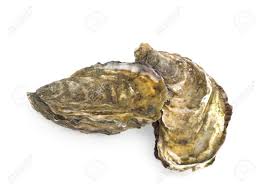 Pacific oysters grow to 12 inches and are found on firm or rocky beaches intertidally to 20 feet. Their shells are fluted, irregular, chalky-white or gray, new growth often colored purple, and can be distorted to conform to the shape of the object to which the oyster is attached.

They are often found in groups attached to one another or to an object such as a rock or a shell. Oysters have uneven valves (shells). The lower shell is cupped and often attached to a hard object. The upper shell is flattened and smaller than the lower. Spawning during the hot summer months temporarily reduces the quality of oysters, making them less desirable. 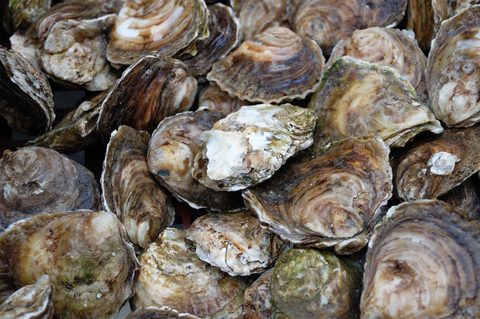 Olympia oysters grow to 3-1/2 inches in diameter and are found on mud-gravel flats, in tide pools with fresh water seepage in intertidal zones to a depths of 165 feet. Their shells are more round than Pacifics, irregular to oval shaped. The exterior is gray, the interior is white or iridescent green. There are notches near the hinge and Olympia oysters have a triangular ligament. Populations decreased drastically due to poor water quality in the early 1900s

Shucking Pacific Oysters on the Beach 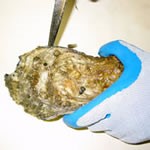 Why is it Required to Shuck Oysters on the Beach?

Shucking oysters and leaving the shells on the public tidelands where they are harvested from is required for the following conservation-based reasons: